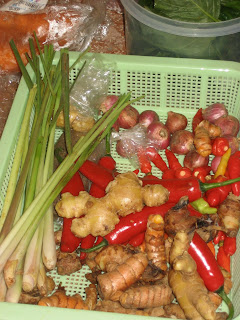 As the weather in New York City grows colder, my mind wanders back to Bali. This past summer, I lived in a house with my friend Glenn, who has a wonderful cook everyone calls Madé Geg (Madé means second-born and Geg, short for jegeg, meaning "pretty," signifies an unmarried woman). The soul of Madé's cooking is her spice paste, called bumbu. And like most Balinese cooks, the most imporant part of her pantry is a basket containing the ingredients to make bumbu, including an array of spices and aromatic rhizomes.

Most spice pastes start with red shallots, garlic, chili, candlenuts, fresh turmeric, ginger, fermented shrimp paste, and a redolent white root called kencur in Indonesian or cekuh in Balinese (“c” is always pronounced “ch”). Cekuh seems to be similar to lesser galangal, although I’ve also heard it referred to poetically as the "root of the resurrection lily." Occasionally, a bumbu will also include lemongrass, coriander, cumin, salam leaves, cloves and black pepper, as well as several things for which I have found no English equivalent. To crush the spices, Madé uses a large mortar and pestle, roughly hewn from black volcanic rock.

Here is a dish Madé made for me, called sayur urab, which is a stir fry featuring spinach and long beans mixed with shredded coconut and lots of bumbu. 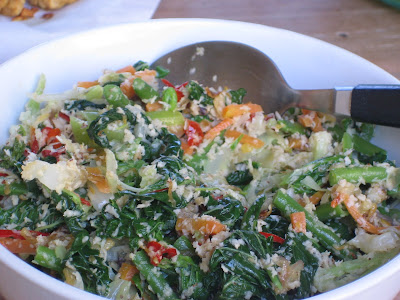 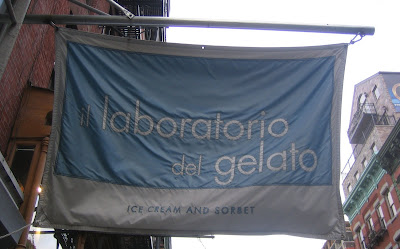 Did you ever notice that grabbing dessert at a local gelateria on the streets of Rome somehow tastes better than even the best gelato back home? Is it just the exotic locale? Something in the water? The different processing of dairy products? It's just not the same over here. The good news: it's still pretty darn good.

After having my mind blown by dessert at Market Table, as I mentioned in a previous blog, I inquired as to the provenance of the dense and intense gelato on my plate. Turns out the restaurant purchased it from Il Laboratorio del Gelato on Orchard Street. So today, 95 Orchard Street (between Broome and Delancey) was on my itinerary. I was not disappointed.

The Laboratorio in question is a tiny sliver of a space, serving up huge flavors. As the friendly scooper on duty informed me, the vast majority of the company's business is devoted to supplying product for restaurants and high-end grocery stores. Still, the walk-in experience was quite pleasant. 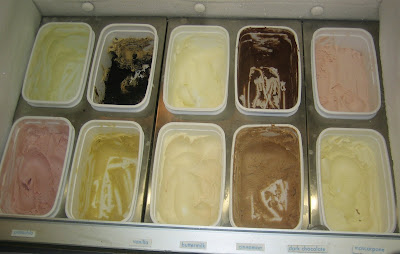 The usual vanilla and chocolate flavors were on hand, as were cinnamon and the classic hazelnut gelato. A bit more unusual were the espresso (combined by hand with oreo crumbs) mascarpone (luxuriously creamy) and buttermilk (refreshingly tangy). For something truly unique, I tried the rose petal, as well as the utterly arresting lavender and honey flavor.

My favorite taste of the day was without doubt the pistachio. It was so rich and intensely nutty that I must acknowledge it to be the best pistachio gelato I have ever tasted. And that alone was worth the trip.

Everybody knows that when in Rome, it's best to do as the Romans do. But even when I'm back home, I still try to stick with the Romans.
Posted by Jeffrey Stock at 12:17 AM 5 comments: