What could be creepier than a living creature, a sentient being, that wants to be eaten by you? It laughs at its own death. It welcomes you to stick the knife in. It even serves itself up! My neighborhood, Times Square, is full of such imagery. 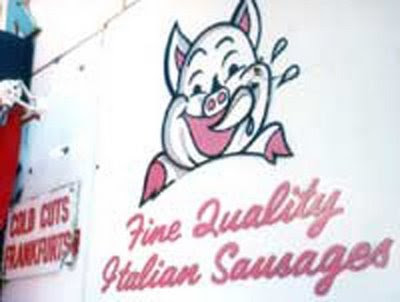 I am lucky to live near Esposito's, one of the few remaining old school butcher shops in New York. It's still a family business that emphasizes house-made sausages and fine technique. But I can't say that I have ever found its storefront image particularly appetizing. I think it's the way the pig is drooling with anticipation to the point where the saliva is flying off its tongue. Why is he so happy to be eating his brethren? Or perhaps his own self? 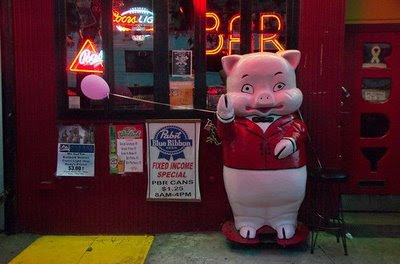 The longstanding classic Rudy's Bar & Grill has a sculpture out front that appears to be a happy pig dressed as some kind of maitre d'. I suppose this is a tad less disturbing because he seems gainfully employed and therefore safe from slaughter for the time being. But he must know there's a hot dog in his future (or his future in a hot dog). 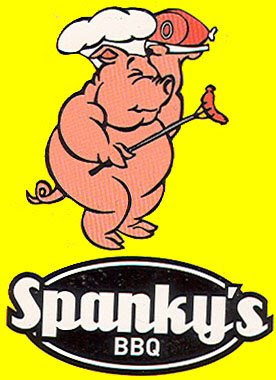 Spanky's Barbecue, just a few yards from my apartment, has a logo in which a self-satisfied hog goes the extra mile and brings you a beautiful bone-in smoked ham on a platter with one hoof, and a sausage on a grill fork with the other. It makes me wonder: is there something he knows that I don't know? Is he bringing me a Trojan ham full of esophagus-blocking gristle? Will he be wearing the same grin as he watches me choke on it? 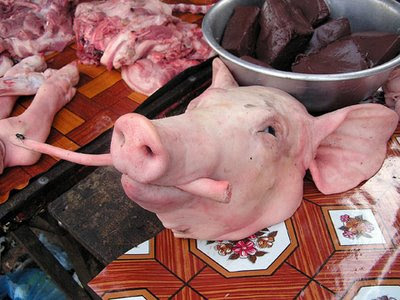 When marketing death, a sense of humor is always useful. Here's a shot of a butcher shop not in the Times Square area in which a pig chomps its own tail. It shows that a little whimsy goes a long way when the ax comes down.
Posted by Jeffrey Stock at 10:28 PM 5 comments:

Some great New York restaurants slip under the radar because they are just outside the city limits. They don't appear in the Zagat guide or in Time Out New York's listings. Most Manhattanites won't even schlep to Brooklyn to try something new, so mention the word "Yonkers" and watch their faces melt. 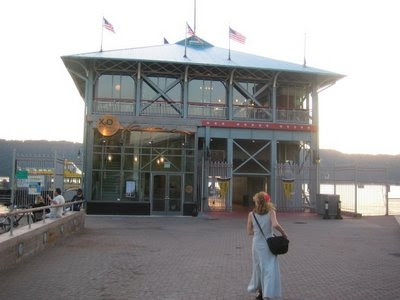 I recently adventured to X2O (Xaviar's on the Hudson), which is, in fact, in Yonkers and very much worth the trip. Chef Peter X. Kelly has created a beautiful oasis of calm situated directly over the Hudson River and featuring delightfully creative cuisine. 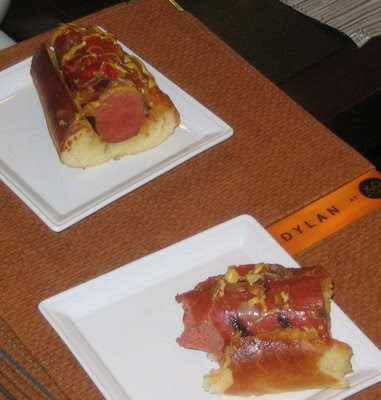 On the way in, past the attractive bar, I noticed someone had ordered some unusual bar food: a Kobe beef hot dog. I don't know which requires more chutzpah: putting that on a menu or ordering it. 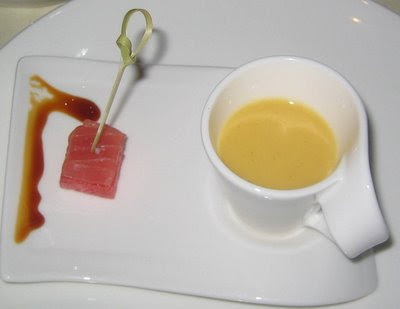 Once we sat down, we were fawned over by the staff and brought an amuse bouche that truly amused. First I tasted a sweet and creamy little cup of cold soup made with peaches and yogurt. And a slender slice of maguro tuna aligned over a slice of watermelon was a revelation. Just pairing the two almost-identical colors was a visual coup, but the combination of taste and texture was the very definition of amusing. 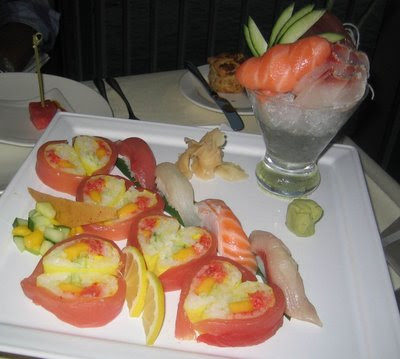 Next we were served one of the most festive plates of sushi/sashimi I have ever seen. The fish was not only fresh and tender but molded into heart-shaped maki rolls stuffed with mango and other surprises.

For appetizers, we chose the little quail legs served with a square of fried polenta topped micro-greens. Next came the shaved fennel and arugula salad with Shropshire cheese. 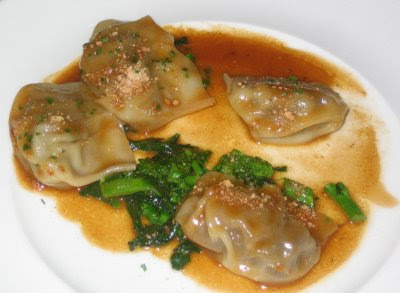 But nothing could compare with the ravioli stuffed with short ribs and foie gras in truffle butter with grated amoretti and broccoli rabe. Short ribs, foie gras and truffles are pretty much my three favorite foods but if I order them all in the same meal, I usually have to lie on the floor and groan for an hour. So having all these tastes in the same appetizer is something of a miracle. 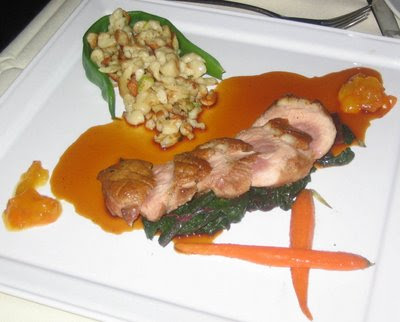 The main courses were no less satisfying. The crispy duck schnitzel was perfectly cooked to juicy pinkness. A nice touch was the side of simple and starchy spatzle that complemented the rich and sweet flavors elsewhere on the plate. 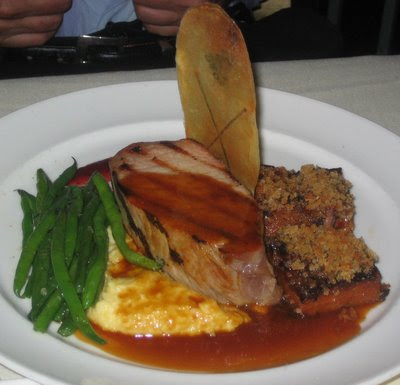 The most dramatic dish of the evening was the mignon of Berkshire black hog and grilled bacon. I doff my cap not only to the chef, but to the brave pig who gave so generously. 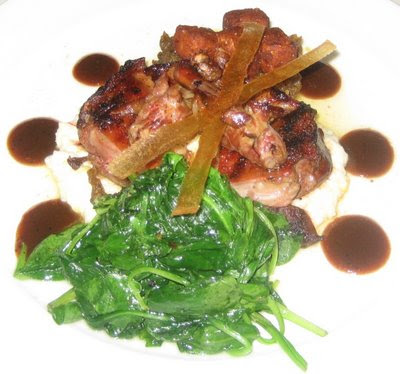 My favorite entrée, if I must choose, was the grilled breast of squab with sweet eggplant and tamarind glaze. The crisp panisses criss-crossing the wilted spinach was a nice touch, but the key to my heart was the bed of white corn and cheddar grits. I'm a sucker for well-turned fancy cookin' mixed with a touch of comfort food. The dots of sweet and tangy sauce really finished the dish nicely. I'm usually a no-dot-and-no-foam kind of guy, but in this case I made an exception. 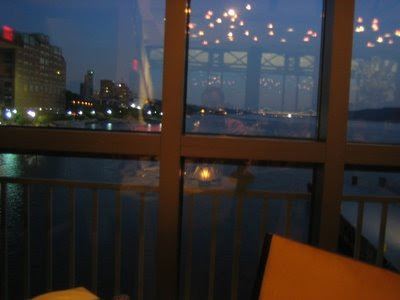 It was around this time in the meal that I realized I was staring out the window at the flowing Hudson and, in the distance, the George Washington Bridge. Nice! 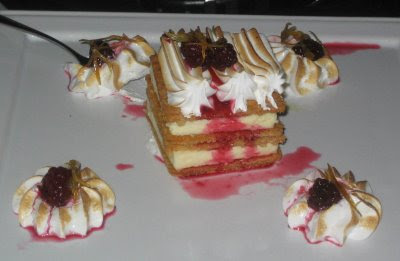 For dessert, we ordered the lemon Napoleon with curd and mousse. It arrived looking something like a poodle with a bad haircut. The menu description boasted of soft meringue and crisp phyllo, and it had all these things, but it didn't do much to add to the over all experience. Or maybe it was because by the time dessert arrived I was simply too full to appreciate anything. I've been known to make that mistake on occasion. 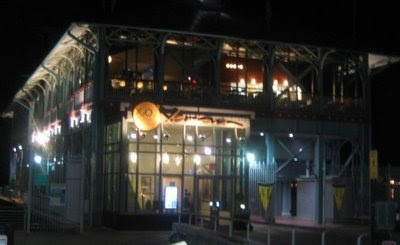 As we left, we had the best digestif of all: a view of the restaurant glowing in the dark as the river burbled below.
Posted by Jeffrey Stock at 11:45 AM No comments: 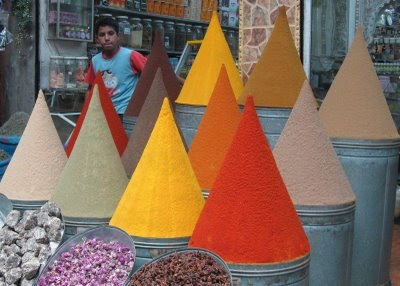 In my recent post, "Butchering, Old School," I included a photo taken in a Moroccan spice shop. The spices in this photo are piled up into tall, perfectly cone-shaped mounds. Fooditude fan Riley posted a comment asking,

"Are those colorful cones really spices piled up, feet high? If so, how do they do anything with them without causing a spice avalanche?"

Good question, Riley. It's one I was asking myself. In fact, I even asked one of my guides in the market how this effect is created, but his answer was vague and evasive. Here is a photo, taken in a different Moroccan shop, of a somewhat less picturesque but more sensible spice scenario. As you can see, the spices are neat, but at feasible heights, with scoopers inserted and ready to scoop. Here is another example from another shop. Again, it's less flashy and eye-catching, but it's certainly more practical. 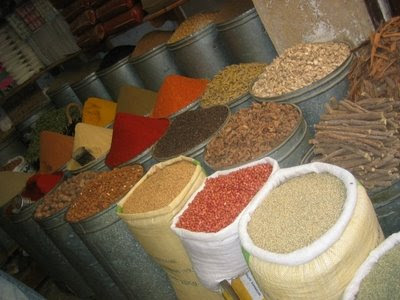 I do remember one day spotting a vendor "repairing" one of his mile-high cones. From the looks of it, there was actually a cone-shaped plaster mold underneath, with the spices kind of caked on around it in a thin crust. When the vendor noticed me staring, he turned his back to block my view. Clearly, this is a big trade secret. 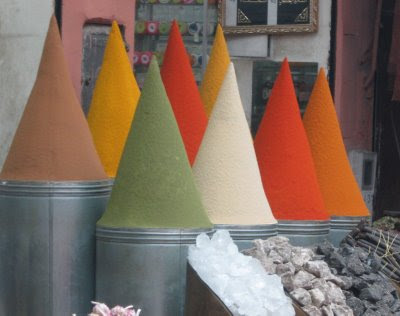 Funny thing: when I turned the corner, I noticed some strange looking people - obviously shop assistants - shooting me a cagey glance. 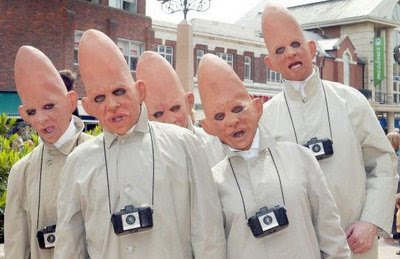 I never went back to that shop.
Posted by Jeffrey Stock at 2:12 PM 3 comments:

Greek To Me, Revisited 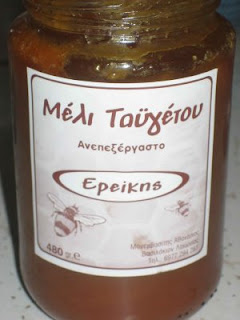 Back in the halcyon days of November, 2007, I sent out a plea to you - dear readers. It was a post entitled "Greek to Me." I had in my hand then a jar of delicious honey from the Greek isles, with a label written in the language of said isles. I asked for someone to come forward and please enlighten us as to what this label actually said. And now some particularly dear reader has done just that. I present to you, in full, what monica_22015 has been kind enough to share: 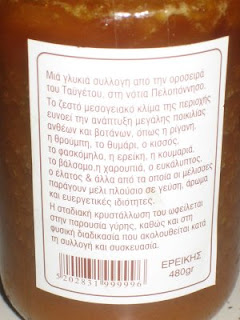 I love your column! I enjoy experimenting with various epicurean, gastronomic delights- you are such an inspiration to me!
Back to 'MELI" -the greek honey jar from Taigetos (a mountain range in Southern Peloponnesus-its highest peek-Mt. Profitis Ilias-elevation 7,900. ft.)The area is commonly known as Mani with its capital city, Sparti in the prefecture of Laconia.

Your jar's label describes its contents as the epitome of honeys comprised of various fauna and herbs from which the bees have gathered the pollen.
The description states that it is a delicate, rare and delightful blend of crystallized honey and bee pollen. Enjoy it! [(I wish I had a jar of it also! ;)]

Posted by Jeffrey Stock at 5:01 PM No comments: 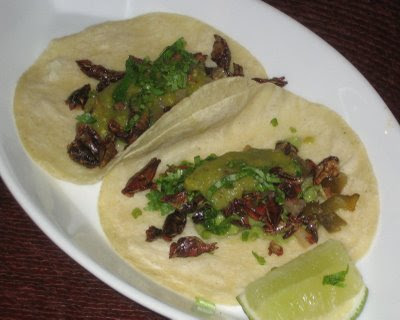 You heard me right. There's an excellent Mexican restaurant called Toloache on 50th Street, near 8th Avenue. It's not your average taco joint. I made a special trip to try their grasshopper tacos, which is apparently a delicacy in parts of Mexico. Who could resist? I was trying to keep it real, but things got a little too real. 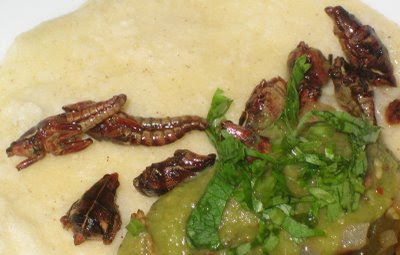 The grasshoppers arrived on my plate, as promised, sprinkled generously over corn taco shells and a dollop of lovely salsa verde. There's a head, a couple of legs, and oh - there's a THORAX! What was I thinking? 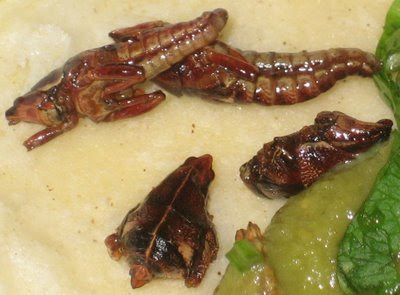 What did they taste like, you may be wondering? Slightly bitter, fairly chewy with a little crunch, a little oily. In a word, they tasted just like fried grasshoppers. Don't get me wrong. I'm glad I ate it. I'll try anything once. And in this case, once was enough.
Posted by Jeffrey Stock at 1:08 PM No comments: