I live near Esca, a high-end restaurant specializing in southern Italian seafood. For years I've passed by, figuring I'd go in there one day when the occasion arose. Well, finally it did: my dad's birthday.

The food was pretty nice, but the service was surprisingly bad. The menus took forever to arrive, as did the drinks. And we were feeling a little rushed since we were on our way to the theater. My dad asked the bus boy for the waiter's name, but he didn't know; apparently this was the waiter's first day. Uh-oh.

At least this gave us plenty of time to catch up. Just as my mother was recounting the plot of the latest movie she'd seen, directed by Philip Seymour Hoffman, another waiter walked into my field of vision who looked A LOT like Mr. Hoffman himself.

Was the actor preparing for a role as a waiter? Could it really be him? Judge for yourself: 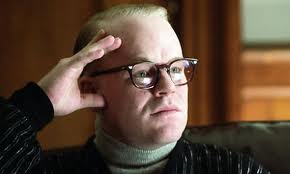 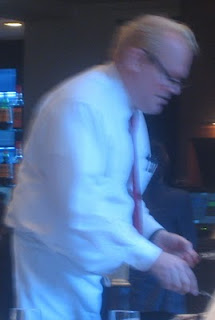 You can only tell the two apart because one of them is busy peeling back fish skin.  I was quite disappointed when faux Philip took FOREVER to fillet my mom's pink snapper, because when everyone else's dishes arrived, they were all cold. They had been sitting there on the fillet table the whole time. Shouldn't a place of this caliber have a better system? We had to send the other dishes back to be reheated. And after all that, there were still plenty of bones in the snapper. Had faux Philip ever even filleted a fish before? Odd, since Hoffman's new movie is called Jack Goes Boating.

I'm not sure I'd go back to Esca, despite the fact that the food, once it arrived, wasn't bad. Because, despite the celebrity sighting, we certainly did not get celebrity service.
Posted by Jeffrey Stock at 1:24 PM 5 comments:

There's not much argument that Mozaic is the best restaurant in the Ubud area of Bali. It's got a world class chef in Chris Salans and is so much more than just a fancy-schmancy resort restaurant, which are so numerous in Bali.

There are four prix fixe menus available:
We shared the Discovery Menu and the Vegetarian Tasting Menu and we were not disappointed. Here were some of the highlights.
This amuse-bouche had a sweet-savory tension, culminating in a unique tomato sorbet. 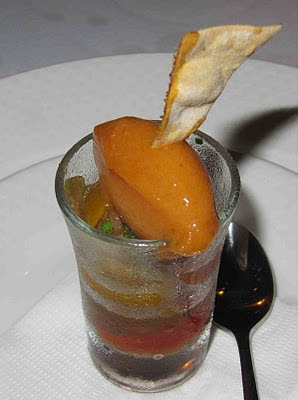 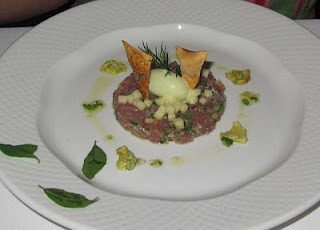 The next course was a selection of seafood with soft shelled crab as the centerpiece. It came with burnt cauliflower florets, curry leaf meuniere and curry emulsion. I'm not a huge fan of the foam craze in haute cuisine, but it really worked well here. 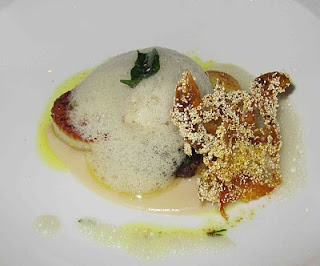 Then came a hearty Australian beef tenderloin with ripe Balinese jackfruit, in a reductino of vermouth, balsamic and cardamom, with eggplant caviar and Dukkah spices. Dukkah is an Egyptian spice mixture, often used with nuts. 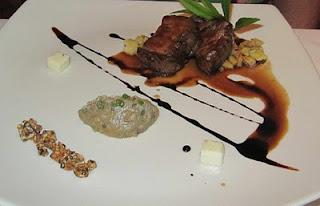 The highlight of the entire meal was a simple sounding dish that really took us by surprise: parmesan-crusted potato gnocchi over a pumpkin sauce with an herb emulsion. These gnocchi were delicate and soft, but had a perfectly caramelized crispy exterior. 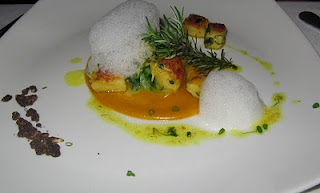 The real star of this show, however, was the spice you see in the lower left-hand corner of the photo: candied long pepper. Regular readers of this blog will know my enthusiasm for long pepper, the superior cousin to the more common and sharp-flavored peppercorn. Here is my previous post on the subject. Combining this warm and pungent flavor with a crust of sugar was sheer brilliance. 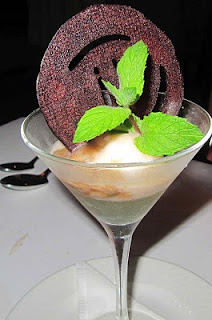 I've made no secret that my favorite fruit is the mangosteen, and it was a joy to try mangosteen sorbet as dessert. Subtle, fragrant and tart, it was the perfect closer. It was served with mint geleé and black rice tuile.
Posted by Jeffrey Stock at 6:36 PM 2 comments: 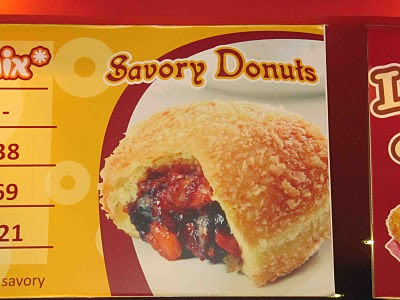 I've been busy traveling and haven't had much time to post, but after trips to India, China, Indonesia, and beyond, I have many new tastes to talk about.
I was just in Jakarta and was looking for fresh flavors in Blok M Plaza. They have lots of fast food borrowed from the West, but sometimes with a twist.
"Savory Donuts" is something I hadn't seen before, nor did it sound too appealing. I gave it a shot, and I wasn't disappointed. Salty, sugary, oily. It was just as gross as I had imagined.
Posted by Jeffrey Stock at 12:32 PM No comments: