Tonight was the 40th anniversary of the Waldman family Christmas Eve party. The fact that I have been attending for the last 17 years should sound like a lot, but compared to 40, it doesn't seem very long.

Growing up Jewish, I never much regretted not having a Christmas tree or not hanging stockings or any of those trappings. But missing out on singing carols, that's another story. "Good King Wenceslas," "The Holly and the Ivy," "The Little Drummer Boy," and the list goes on. Christmas music is some of the most beautiful I know and I always felt sorry to be excluded from that. 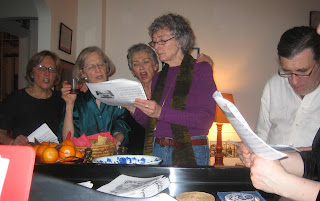 Until 1991, that is, when I first attended the party at Bob and Judy Waldman's house on the Upper West Side. It's like a clandestine gathering where New York Jews can indulge in the somehow guilty pleasure of Christmas carols and songs. No need to stay home and be silent! Sheet music is passed around and everyone sings (preferably in four-part harmony). 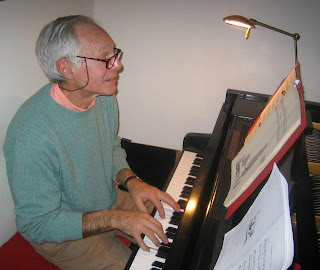 Bob, an accomplished composer of Broadway musicals such as "The Robber Bridegroom," leads the chorus from the piano, although in recent years, I have been lending a hand (or two). His son Price, a Broadway actor and a friend of mine for the last 23 years, lends his resonant bass-baritone voice, which one would normally need to pay $100 per person to hear.

And what would a Jewish Christmas party be without plenty of Jewish food? Fortunately, Judy and Stanley Zabar, of Zabar's gourmet emporium fame, happen to live in the building and bring the smoked salmon. It is beautifully plated in the shape of a fish. 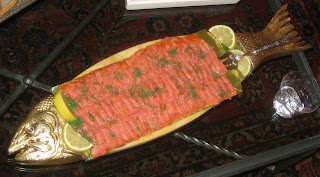 There is also white fish salad, artfully covered in cucumber slices, also in the shape of a fish and presented between the head and tail of an actual fish. 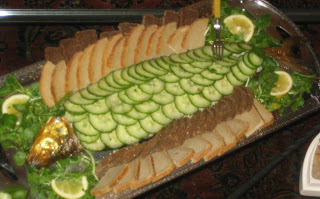 There's the egg salad topped with caviar in the shape of -- just for variety -- a Christmas tree. 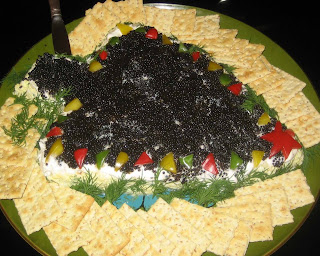 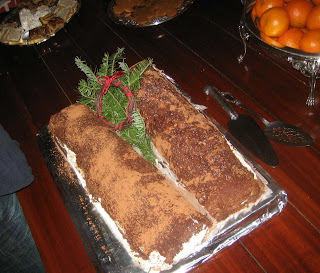 After singing through the entire songbook, everyone repairs to the library for a cup of hot soup. It's always the same recipe: a cream based broth with comforting chunks of potato and green pepper. And dessert: Gevalt! Besides a sinful assortment of lemon squares, and pecan cookies that taste like butter making love to sugar, there is the famous (infamous) chocolate yule log.

As Price puts it, it's like a giant Drake's Devil Dog, except with luscious whipped cream swirled inside instead of "creme filling."

And to make sure the tradition goes on for another 40 years and more, Price's son Jasper has begun to play the piano. Here he is looking like the 89th key at the bottom of the keyboard.

So let the yuletide ring and let the Jews of Upper-West-Side-istan gather. Music is for all the world to enjoy, and enjoy it we shall. Secretly. With just a touch of Jewish guilt.
Posted by Jeffrey Stock at 10:39 PM