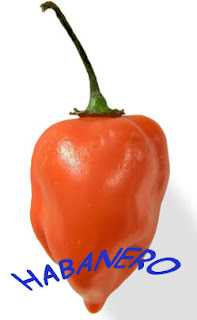 Respect the chili. Always, always respect the chili. The habanero pepper is one of the hottest peppers in existence. (India's Naga Jolokia -- also called "Ghost Pepper" -- is tops, according to the Guinness Book of World Records.) How do they know? Because the substance that makes foods hot has been identified as capsaicin (8 - methyl - N - vanillyl - 6 - nonenamide), which is measured in something called Scoville Units. The habanero pepper, also known as the Scotch Bonnet, contains up to half a

million Scoville Units. A jalapeño pepper, by contrast, has less than ten thousand. Pure capsaicin has 16 million. Don't mess with that stuff. Respect the chili.

I should know. I was once attacked with pepper spray in the Paris metro as I tried to be a hero by chasing after a thief who stole my friend's wallet. Big mistake. The thief turned the tables and got me good. I ran like a ninny into the Parisian streets and tried to wash my eyes out in a bistro bathroom. Oddly, it didn't hurt that much until I used the water on my eyes. That made me scream uncontrollably, which is considered in French culture to be a faux pas. 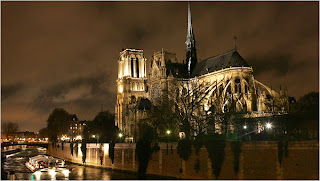 So after being chased away by the bistro proprietor, my friends and I schlepped home on foot because we had missed the last metro. For several days, as the capsaicin worked its way painfully through my body, I took some consolation in the gaudy beauty of Paris.

I recently came across an unforgettable video of a kid who did not respect the chili. He tries to eat a habanero and is smacked down like the fool he is. He's quite nonchalant at first, munching away smugly, until the white light of pain suddenly strikes. His pathetic shrieks are haunting and ridiculous.

Remember: respect. Always, always, respect the chili. I bet this kid does now. 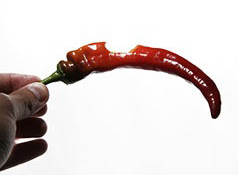 Posted by Jeffrey Stock at 9:56 PM

How the present does change the past: We were not many 'friends' at the Parisian pepper spray scene, we were just two foolish but moral lads. If we had been with larger numbers, who knows how the scene might have played out differently. But that was an uncomfortable walk home, especially after the police brushed us aside and told us there was nothing to be done.

Thoughts of spice in Paris prompt another memory, perhaps best cross-referenced to your mustard posting of weeks and weeks ago. Do you recall our slim-pickings dinners/lunches, usually carb-loaded with cheap fries packed into a half baguette and flavored with a thin merguez or two? Do you remember the reliance on mustard (il n'y que Maille qui m'aille!), indulged every now and again, when profits were thin, as a meal's sole ingredient? The challenge: Who could suffer the largest spoonful of pure hot mustard without busting a fuse? I forget the name of the chemical released by a heavy dose of hot, but it sure turned things on.

Well, the odd thing was the "friends" we were defending did not contribute to defending themselves. In fact, no one noticed they had been robbed until I said, "Everyone check your pockets." And unlike us, they went home capsaicin-free, while we went home with red and teary eyes... Ah, Paris!