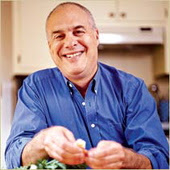 I like Mark Bittman, I really do. He's the food guy who writes the New York Times column called "The Minimalist," and has written some cookbooks with severely "maximalist" titles, such as How to Cook Everything and The Best Recipes in the World. I like his curmudgeonly Jewish humor. I like his persona somewhere between no-nonsense and impatient. He always seems to be cutting out the clutter, but along the way he cuts out a few very important details, dismissing them as de minimis, if you will. That's where Fooditude comes to the rescue. 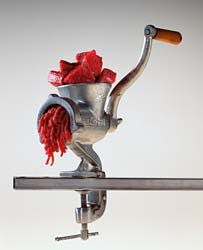 In this, the first installment of De Minimis, I am rebutting a point Bittman made last month in an interview on KCRW's Good Food program hosted by Evan Kleiman. He talks about how much better ground meat is when you grind your own. Unless you have a proper butcher to take care of your needs, which few Americans do these days, the only alternative is to buy the ground chuck or ground sirloin bought by supermarkets in huge tubes or slabs and then divvied up.

I agree with him wholeheartedly on this, but then he proceeds to say that he doesn't bother with a meat grinder and for fifteen years has ground his meat quite successfully in a food processor. This is bad advice, Mr. Minimalist. A food processor will certainly chop meat into smaller pieces, but it will render it into dense mush. A real meat grinder, which is not a big deal to use, pushes the meat through a die, like a spaghetti maker, creating the all-important grain of the ground meat. 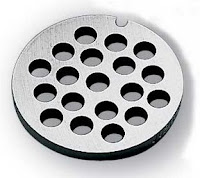 I believe in a good hot grill. I believe in keeping spices and fancy additives to a minimum. But I believe that the single most important factor in making a good burger is not to over-handle the meat when making it into patties. Why? To preserve the grain, the space in between, the texture of the grinding! This yields a juicier burger, with an almost crumbly texture. And this is only possible, of course, when the meat has been fed through a grinder.

Years ago I bought an old cast iron grinder for five bucks at a flea market, which clamps to any counter or table top. You can buy a new one at Amazon.com for about fifteen.

As I am wont to do, I shall now close by quoting from the Broadway musical Sweeney Todd:

Posted by Jeffrey Stock at 3:24 PM

"Three Times Through the Grinder"! Who told you the title to my autobiography-in-progress?

On another note...yesterday I saw dried mangosteen chips at my local Trader Joe's. Dearest Fooditude, what is your opinion about this trend toward drying and chipifying everything in sight?

In the absence of fresh mangosteens, I would be very curious to try these new chips. I will rush to my nearest Trader Joe's asap.